Mona, a university student lives with her mother Nooshin who is a teacher. Nooshin had told Mona that her father was killed in an accident when he was helping a climber friend in a mountain before she was born. In spite of her mother’s strict control on her relations, she has a boyfriend. They plan to go to study in Canada. Looking for her passport, Mona checks out a box hidden in the basement and in there, she finds a photo of her mother with a Japanese man and herself as an infant. Also there is a small note written in Japanese. She takes the picture of the notebook and has it translated in Japanese language dept. at her university. There she finds out her birth place was in Tokyo. Getting suspicious at her mother, she follows her when she leaves home and goes to a hotel late at night. Mona finds out that her mother is meeting a Japanese man. The relation between mother and daughter distracts. Mona is doubting all the stories told by her mother about the father she has never met… Is this Japanese man her real father? What is the relation between him and her mother? 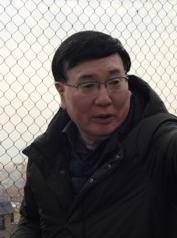 Takefumi TSUTSUI Born 1957. He is Chair of the Department of Film Production, Graduate School of Film and New Media and a professor of the Editing Course. Started film making while attending Tokyo Zokei University. Made his feature-length film as a debut film with the silent film titled “Yumeko no daibouken” in 1987. While working mainly as an editor and director, he writes numerous film-related reviews, and is now writing a series of new movie reviews in Kinema Jumpo Film magazine. His major works include Overdrive (2004), Bach’ s Portrait (Bahha no shozo) (2010), and In a Lonely Planet (Kodokuna Wakusei) (2011). He also has newly completed Fancy Free (Jiyu na Fancy), and a documentary on Toshio Matsumoto Eizono Hakken=Matsumoto Toshio no Jidai.